If you are looking for one of the recognized breeds of Munchkin Cats then one of the possibilities are the Minskin and Bambino cats. They look very striking and it’s important to know the basics of these breeds before making your selection.

The Minskin is a cat breed that’s a cross between the Munchkin and Sphynx, Burmese and Devon Rex. It was first developed in 1998 to have short legs and dense fur on areas like the face, legs, and tail. The International Cat Association (TICA) accepted Bambinos in 2005. The Bambino, meaning baby in Italian, is the the result of very recent breeding programs, involving the Munchkin Cat and the Sphynx. This breed also has short legs and features big upright ears and a usually hairless body, although it can have very light fur.

What are the Minskin and Bambino?

These cat breeds are a Munchkin Cat with a Sphynx parentage. They’re both classified as dwarf cats, but there are some differences.

The Minskin is a cross of various extra cat breeds including the:

It has an appearance like the Corgi due to the short legs and thick body. The name blends the words “miniature” as well as “skin.”

Other features include round heads, big ears, and large/round eyes. The stomach has no hair, but some parts of the body have patches of hair including the nose, ears, legs, and tail.

The International Cat Association (TICA) classifies as a new breed and has been shown in cat shows in 2008. The Minskin can be hairless or have hair like the Munchkin, but these variants cannot be entered into competitions.

The classic Minskin coat has a “fur-pointed” coat that’s thin/sparse and four-pointed extremities. This cat breed is generally healthy and sociable around other animals.

The Bambino is a short-legged Sphynx (hairless) cat. It translates from the Italian word for “baby” and is named as such since it looks like a newborn baby when totally bald. If the Bambino has hair, then it’s light and soft.

This cat breed has resulted from breeding the hairless Sphynx and short-legged Munchkin. It’s produced unique results. The Bambino cat’s shortness affects how quickly it can move and run.

These felines are also friendly, which is based on the personalities of the parent breeds. Bambinos are playful and actually fast/athletic even though they’re small. They’re good indoor cats since their bald skin is sensitive to hot/cold temperatures.

The Difference Between Minskin and Bambino Cats

While the difference can be a little confusing, in simple plain English, the Bambino is a simple cross breed of Munchkin Cat and Sphynx.

Alternatively, the Minskin is a cross between several cats, the Sphynx, Munchkin, Burmese and Devon Rex cat breeds.

The Minskin has a body that’s small to medium-sized. It’s low to the ground because of its short legs. The cat has a sparse coat, big ears, tapering nose, and round eyes. The coat’s soft fur is at the points/extremities including the feline’s ears, legs, and tail.

Minskins can be any color and patterns and usually weigh 4 to 6 pounds. However, the most common ones include solid colors, tabby, and tortoiseshell. The short coat requires little grooming and rarely sheds, which makes it a good option for pet owners who are worried about shedding cats.

Minskins are known as a cat breed that’s active, playful, and sociable so they can make any household more lively. They like companionship and don’t want to be left alone for a long time.

The Bambino is a bred that was made as a cross between the Munchkin and Sphynx breeds. The two most distinctive features of the feline breed are the wrinkled, hairless body and short legs. The cat’s back legs are sometimes a little longer than the front legs.

A Bambino’s body is medium-to-long in length with a wide chest and round abdomen. It has medium boning. The bambino’s whip-like tail is well-proportioned vs. the rest of the body. Sometimes bambinos have a “lion tail” that includes a puff of hair on the tail’s tip.

The cat’s head is wedge-like with lines that are longer than wide. Like the Sphynx, the cat’s cheekbones/whisker pads are very noticeable. Its whiskers are short and sparse. The chin is strong, and the eyes are big and round. A Bambino’s big ears are upright and aren’t too low or high.

This cat’s breed’s weight ranges from 5 to 9 pounds. The Bambinos’ small size and physical features don’t prevent it from moving and running.

If you’re looking for a friendly and playful cat breed, you should consider a Minskin. They’re very loyal and sociable, so it’s easy for them to become attached to human owners. They also get along well with other cats and dogs so if you have other pets, your family’s new member will get along well with them. 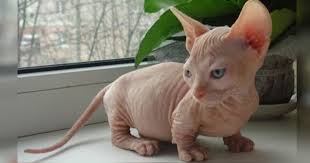 The cat breed has little hair so you won’t have to worry about brushing them. You just have to wipe down the coat from time to time when it’s needed. Since they have little hair, it’s important to wrap your feline friend in a warm towel after bathing it so they won’t get chilled.

You’ll also need to do regular cleaning of the ears and teeth. Nail trimming is also an important grooming practice to keep your pet neat and tidy.

The lifespan of a Minskin cat is 12-15 years. This is slightly lower than the average 16-year lifespan of house cats.

The Bambino has little body hair, so it’s very easy to groom. Like its feline cousin Minskin, you’ll also have to make sure to keep its body warm right after taking a bath so it won’t get the chills.

Another similarity to Minskins is Bambinos are also friendly and sociable. This is due to its parent breeds Munchkin and Sphynx also having the same personality. So you won’t have any problems with the Bambino getting along with the humans and other pets in your household.

Bambinos are active, but their short legs cause them to get tired quite fast. It also affects their jumping ability so they can’t leap as high as other cat breeds. On the other hand, the short legs also allow them to land better after long falls.

Bambinos have an average life expectancy of 12 years, which is fractionally less than your average house cat, but completely in line with known Munchkin Cat lifespans. 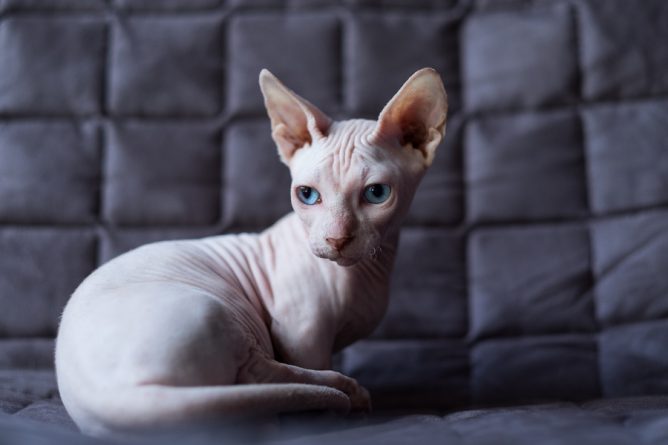 TICA is the world’s biggest genetic cat registry and was founded nearly four decades ago in 1979. It was founded in the USA but is now a global organization.

In 1998 cat breeder Paul McSorley of Boston, Massachusetts (USA) crossed a Munchkin with hairless Sphynx then later crossed Devon Rex and Burmese cats to create a new breed with points of fur like a Siamese’s color points.

McSorley made various breeding tweaks to improve the new Minskin breed. That included boosting the immune system by combining “fuzzy” Sphynx with the dense fur limited to the extremities.

Incidentally, McSorley himself says he chose the name Minskin as an abbreviation of Min (miniature size and legs) and Skin (because of their lack of full coat and usually bald stomachs). He also noted it closely resembled the parentage of the Munchkin.

In 2008 TICA recognized Minskin cats as a Preliminary New Breed (PNB). In the future, TICA will receive full recognition within the Championship class.

The Bambino is a cross-breed that was created by combining the Munchkin and Sphynx breeds. It was created by accident by house-breeders Pat/Stephanie Osborne. They named the new breed for the Italian word that means baby/child due to Pat’s Italian heritage.

Almost all exhibition systems have registered the Bambino breed. It’s a rare and expensive breed. In order to create a pure-blooded Bambino, it must be 3 generations after the Sphynx and Munchkin cross-breeding. In 2005 the first Bambino litter was registered with TICA as an experimental breed.

Are There Minskin and Bambino Health Problems?

Munchkins are generally more prone to health conditions like Pectus Excavatum and Lordosis. Pectus Excavatum is an abnormal development of the cat’s body. It’s caused when the breastbone grows inward, which causes a significant and sometimes major indentation within the chest wall. This condition can be corrected through minimally invasive surgery or through open surgery. This condition usually develops during the cat’s adolescence.

Lordosis is a condition that affects the lower back’s lumbar region. This causes the spinal cord to curve inward, which puts great stress on the whole back. In most cases, the deformities exist at birth. However, older cats can also experience Lordosis. Medications and therapy can help to treat the condition.

Meanwhile, a Sphynx is generally a healthy cat, but there are some more common conditions you should be aware of. Due to a lack of hair, they’re more likely to experience:

So while there have been no studies to attach known conditions to the Minskin or the Bambino, it might be wise to keep an eye out for the conditions known to be present from the parent lineage. 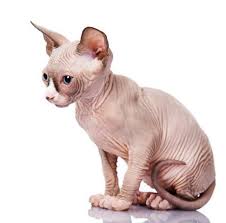 If you’re considering a new cat for breeding or as a pet the Minskin and Bambino are two good options. The Minskin has been recognized by TICA since 2005 and was developed by cross-breeding the Munchkin and Sphynx breeds.

The Minskin has the appearance and personality of its parent breeds. Its physical features include short legs, big ears, and soft fur. The cats are also friendly to humans and other animals they’re around. Grooming is quite easy due to limited hair.

Meanwhile, the Bambino (baby) cat’s main features are its hairless body and short legs. It also includes big round eyes, short whiskers, and wedge-shaped head. The breed is quite mobile despite its small size and physical features. Like the Minskin, the Bambino is also friendly so it will interact well with adults/kids and cats/dogs in your home.

Both the Minskin and Bambino are susceptible to certain health conditions in part due to their bald bodies. However, They’re still a good choice if you’re looking for a unique, rare, and friendly feline.