I’m not as familiar with the Skookum (pronounced Skoo Kum) as I perhaps should be as I’ve never specifically bred them. Like most Munchkin origins it’s still considered a new breed.

The Skookum’s story begins in the late 1990’s with Roy Galusha who along with international breeders decided to cross a Munchkin Cat with a LaPerm.

Skookum apparently means ‘mighty’, ‘powerful’ or ‘great’ in native Indian and I’m trying to decide still if that’s sarcasm or satire. However, it also means ‘good spirits’ as well so that may be where they were going with it wh it was named. 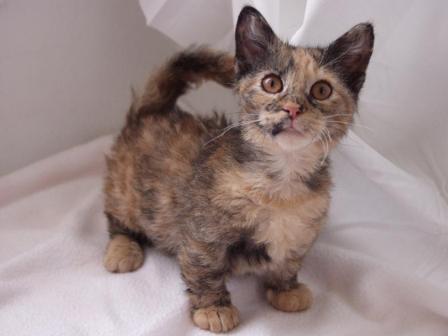 Some of the most popular breeds of cats appeared as a result of cross-breeding, a controversial method of mixing up two breeds of cats. The goal of this method is to obtain an offspring, and hopefully, it will inherit the best features from both parents. It is controversial, because sometimes the offspring may have some health disorders. Cross-breeding is not a bad thing, but it shouldn’t be done without proper research and without knowing the risks.

The Skookum is a result of this cross-breeding, but because this cat is still new and rare, they haven’t been yet recognized by many registries. But some of them did (TICA) as an experimental breed, and that means that they still need how this breed will develop so they can fully recognize it.

What is a Skookum?

As aforementioned, the Skookum is cross-bred cat between the Munchkin cat and LaPerm cat. It belongs to the dwarf breeds which means their leg bones are shorter than a normal-size cat. The female weighs around 4lb and the male around 6lb.

The parents, the Munchkin cat, and the LaPerm cat which is known for its curly fur and intelligence. The result of cross-breeding them was the Skookum cat, a small energetic cat, intelligent, with curly fur and really affectionate and playful.

They are usually known for their confidence and calm personality. Another personality trait would be intelligence. They are sweet cats, and they will, for sure, crawl their way into your heart. Because it is a cat that loves to play with humans, you should be ready, to free up some time to play with it. And they will respond with love in return.

Grooming a Skookum cat is not difficult even if it might seem so because of the curly fur. Brushing its coat twice a week should be enough for it to look fabulous, but this is the minimum amount. You could brush your cat’s fur how many times you would like, especially if you want a stronger bond between the two of you.
Identifying a Skookum Munchkin Cat

The stature of this cat will be always closer to the ground due to the short back legs, and short front legs. Because of this, it can be easily recognized. You might consider it a funny look, or think that the Skookum cat wouldn’t be able to run, climb and play like the other cats, but this is not true, and even though they have short legs, they can climb like any other cat.

You could identify a Skookum cat by looking at the rounded chest and feet, the thick body and neck, and you should not forget the curly fur. The Skookum cats have big, pointing ears which will make them easily recognizable, as well. The fur’s colors cannot be a feature to look at when you want to identify a Skookum cat because it can have different patterns and colors.

Here’s how wikipedia describes a Skookum

The neck and body are moderate in type but thickish with a rounded chest and good solid musculature structure. The body should not appear elongated, but tends slightly more towards cobby type. The short yet well proportioned legs have medium boning. The upper and lower forelegs are approximately even in length, as are the thighs and lower legs of the slightly longer hind legs. The feet are well rounded and compact and well planted. The coat is the result of the LaPerm gene so has a similar soft light airy texture. It should not be overly thick and should stand away from the body on fuzzy ringlets and curls or waves. The curls should not ripple close to the body but should spiral randomly out away from the skin. They can be long haired or short haired and the short coated variety has a coat which is closer to the body but still springy in feel. Regardless of hair length the Skookum should have very prominent curled whiskers and eyebrows. They are fun loving and kittenish cats, playful and athletic and fond of jumping and climbing. 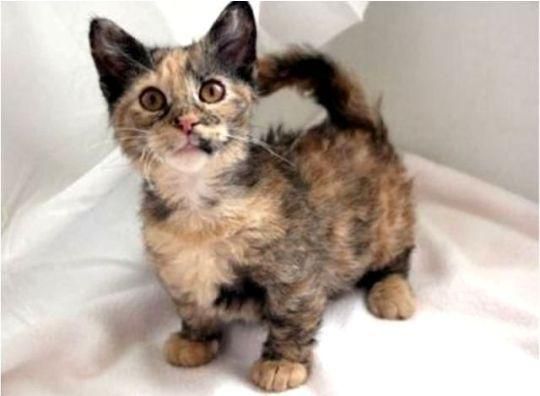 Owning a Skookum is not different from owning any other, healthy cat. But they are the same factors you should account for before deciding to adopt one. For example, they are curious and playful cats, and you need to make sure you have time to spend with them as they really need your love. There are some cats that only need food, and your owner duties end there. This is not the case with the Skookum cat.

They are perfect for families with kids, as they will probably enjoy playing with the Skookum cat as much as the cat. And this way if you have something important to do, you are allowed to take as much time as needed.

If you are worrying that grooming will be a difficult task because of the curly, then you should stop worrying now, as grooming them is even more comfortable than it is grooming a straight-hair cat.

If you still don’t know what you might expect from your Skookum cat personality, then you should take a look at its parents, the Munchkin cat and the LaPerm cat and if you like their personalities then you will like the Skookum’s personality as well.

I am not sure of the Skookum’s cat life span or any major health problems due to the fact that it is still a new breed and there is not enough information. Thus so far, it should be the general 12 to 14 years as expected from Munchkin Cats.

TICA or The International Cat Association is the most significant genetic cat registry from the world, and it accepted the Skookum as an experimental breed of cat.

The breeding of the Skookum cats started in 1990, and soon after other breeders followed the example of Roy Galusha as well. Skookum is a word with Native American origins, and it means mighty. Such a strong name for such a small name.

Even though the Skookum cat is accepted by TICA as an experimental breed, it hasn’t accepted its name yet because they want to make sure it doesn’t have any negative connotations. The Skookum can enter cat competitions, and in Australia, they have a Skookum champion.
Are There Skookum Health Problems?

Munchkin cats are said to be prone to have lordosis and pectus excavatum. LaPerm cats are healthy cats without any genetic disorders. This being said the Skookum might inherit the health problems, as might any recognized breed of Munchkin Cat.

Largely the breed is still too new for any definitive diagnosis, so any comments on the health of the Skookum can’t really have much factual backing. However, it is possible to intelligently speculate as the parentage of the breed does have known conditions that they are more susceptible to.

LaPerms are considered generally healthy with no known genetic or predispositions to illnesses or body function failures. Thus you might assume that they don’t pass on any genetic dispositions to the Skookum.

The Skookum cat doesn’t have any specific health problems that are known about, but that doesn’t mean that it cannot develop health problems. That’s why you should take into consideration this fact when adopting a Skookum cat, and consider getting a good health certificate if buying from a breeder.

The Skookum cat could be the perfect pet due to its personality, and you will grow fond of it really fast. It is a curious, energetic, affectionate and intelligent cat which will play with you whenever given a chance. Hopefully, the breeders won’t discover any major health problems and TICA will change the status from experimental to breed.

The price of a Skookum cat can go as high as 2000 US Dollars, and if you can and want to pay this amount, then you will get a really affectionate cat which is great with children. It is certainly a popular choice with people with many positive comments that I found on blogs and forums.

Thus, if you are thinking about taking ownership of a Skookum then there really isn’t any reason why you shouldn’t.