I’m sure you know about Munchkin Cats and the recognized new breeds. These new recognized breed of Munchkins can be fluffy, large, and generally cute! But have you heard about the Munchkin Cat Bengal mix – or simply the Genetta Cat? Well, it really looks like a typical cat, and you probably have seen one.

A Genetta cat is actually a new breed that was developed by the breeders at Pawstruck Cattery. They developed this breed to serve customers who wanted to own a Genet but for obvious reasons can’t own one because Genets are not really domestic cats. They are African based wild animals. A Genet is nocturnal and see all the smaller pets as food. Hence, a great alternative is the Genetta cat! They are basically small (short-legged) cats, a mix of the domestic Bengal and a Munchkin, that are playful and active and just cuter than the African Genet. 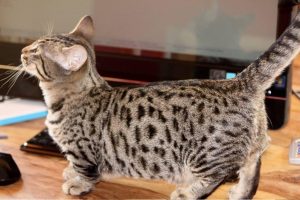 What Is a Genetta?

As previously mentioned, the Genetta cat is a new breed of cats that was developed by the breeders at Pawstruck Cattery. This was all started in 2006 by Shannon Kiley when he saw a need from exotic animal lovers who want to own a Genet but can’t for some reason – i.e. not allowed in their state/country, expensive, can’t find an exporter who will deliver it to them, climate in their location not suitable for genets, etc.

On December 13, 2006, the first breed of Genetta cats was born. Although Genetta cats are intended to look like genets. There are actually no genets used in the creation and breeding process.

A cross of Savannahs, SBT, Bengals, and Munchkins have been used instead. Which basically means that said breeds are the parentage of Genatta. 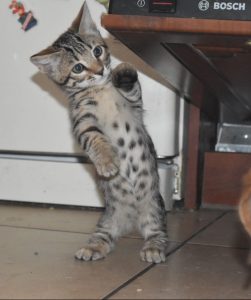 You can identify a Genetta Munchkin Cat by its short-legged size and its Asian Leopard skin. Short-legged Genetta cats are considered the “standard”, so they are normally considered dwarf breed cats.

For their overall structure, they get mainly their physical characteristics from the Munchkin Cat, hence the name is a reference to them. Aside from short legs, which is a key characteristic of a Munchkin, they also resemble the shape of a dachshund dog in terms of how their body is lowered. Also, look at how they move – they’re super fast, agile and energetic!

So, when you see a cat that looks like a munchkin – short, lowered body, and super fast – with ala Asian leopard skin, that’s probably a Genetta Munchkin Cat.

A non standard Genetta will look pretty much the same as a Bengal though.

The Genetta Colors and Patterns

The Genetta colors are seemingly designed to resemble a wild African cat. Thus, it will look mainly like a small Tiger or Leopard.

There are several colors but predominantly there are reddy orange and brown mixes. Even silver occasionally.

Patterns are mainly spotty and stripy, but can also be described as ‘marbled’

Green and Gold eyes are also common in traditional Bengals so could be passed down.

Luckily for those short on time, the Bengal is considered a low shedding cat, so additional grooming is not needed as much as say, a Persian.

Once or twice a week is considered optimal, mainly just to help with lowering the chance of hairballs.

The genes of the Bengal seem to have passed to the Genetta, which is widely regarded as a low shedding cat. 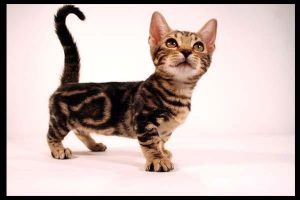 Genetta cats are typically affectionate, energetic and very playful. So you can probably expect a cat that will be very playful in your large pieces of furniture, grassland, or anywhere around the house. Because of their activeness and playfulness, it will require a lot of your attention and interaction. Never leave them alone for a long time, or things may happen!

Many Genetta cats love to play fetch and they will even play/wrestle with your family dog if the dog is friendly with the feline. Genetta cats can live from 9 to 15 years. They are compatible with owners who can give them constant attention, or better yet, is active himself/herself. If you have children, they can also be your ideal pet as the children will love to play with them!

In short, it can be like owning a mini Tiger. At least that’s the way I look at them.

The Genetta is currently under registration for TICA. It is still waiting to be recognized. Nevertheless, the cat can also be registered under The Dwarf Cat Association (TDCA) and Rare and Exotic Feline Registry (REFR). While TICA is yet to recognize the Genetta, the breed has growing awareness already behind it.

REFR means “Rare and Exotic Feline Registry”. They specialize in registering cats with rare or exotic breeds. Because the Genetta cat is both dwarf and with a rare breed, they both apply to TDCA and REFR.

The Cat Fanciers Association does not recognize any Munchkin Cat, so the Genetta is certainly not recognized there.

Are There Genetta Health Problems

But when it comes to Genetta, so far, there is no reported health problem that arises from said cats. We can begin at the fact that its lifespan can reach up to 15 years. The health concerns arise because of its short-leggedness. People assume that because they are short-legged, they may have problems short-legged dogs have like a daschund. But so far, this is simply not the case. The suspicion also rises because of their looks, but we have to remember that they are bred to look like a genet. It’s their natural physique which is generally harmless.

It is worth knowing the parental diseases of the Bengal and Savannah cats. As these are a necessary parent to the Genetta, there is likely to be a degree of hereditary illness. I’m not a vet, or a geneticist, but that seems like common sense. 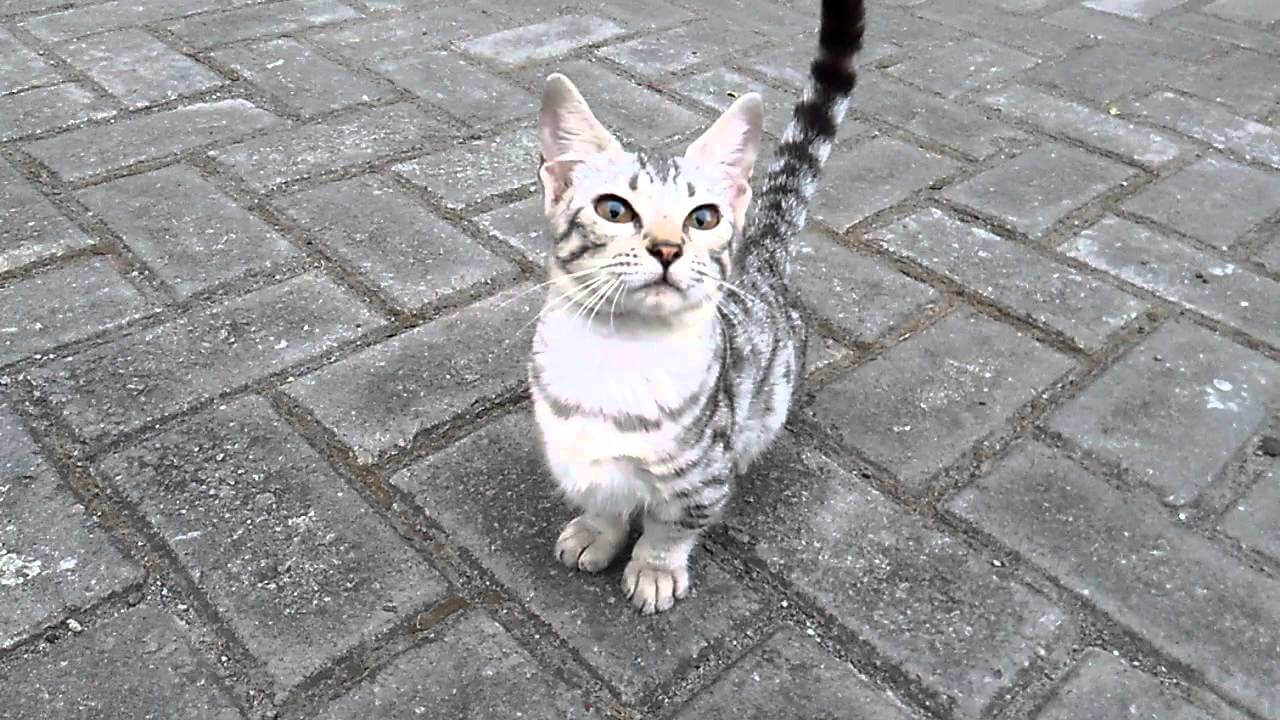 The Bengal cats may have one that is called as Hypertrophic Cardiomyopathy or HCM. This is a disease of the heart muscle itself and is one of the most common heart diseases found in all cats, specifically the Bengals.

Bengals, also according to the Bengal Cat Club (https://bengalcatclub.com/bengal-cats-health-problems/) have had a rising propensity to Progressive Retinal Atrophy or PRA. This is a condition whereby the cones and rods of the cats eyes will deteriorate, eventually leading to blindness.

Savannahs are considered a generally healthy breed, with a few people suggesting they could be a little more susceptible to Hypertrophic cardiomyopathy (HCM), just like the Bengal.

Although Bengals are the direct parents of Genetta, no reports yet have shown that Genetta will most likely inherit this disease. So far, if you just keep the basic health standards for your Genetta cat, you are unlikely to face any problem.

No-one has so far produced definitive evidence that the Genetta cat is more prone to illnesses and should be considered a generally healthy breed.

Genetta cats are one very new breed indeed, and very specific to one specific cattery.. It can be fun if you’re into exotic types of animals or simply want a cat to truly play with. They are playful, active and just cute and naughty! Genetta cats can live from 9 to 15 years.

They are compatible with owners who can give them constant attention, or better yet, are active themselves. If you have children, they can also be your ideal pet as the children will love to play with them! At the same time, you can help raise awareness for this breed if you adopted it and share about it with others!

Also, it will have the added benefit of looking like Shere-Khan lurks in your house.