Have you ever wondered what the result of different breeds of cats would look like if they were cross-bred? If you are a cat lover, I am pretty sure you have these thoughts pretty often. That’s basically how the Kinkalow came to life because someone wondered would the kittens of an American Curl with the Munchkin look like.

You can trace the Kinkalow back to the ‘90s when Terri Harris cross-bred the American Curl with the Munchkin, and as a result, this new breed of cats was born. He didn’t expect this breeding experiment to be a success, but because the parents passed down to the offspring, the best features they had, the short legs and curled ears, the new mix gained popularity and breeders were enthusiastic about it.

I love the look of the Kinkalow, which is why I have bred one, Meet Sushi. 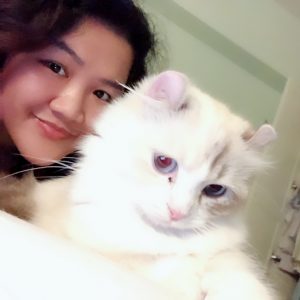 The Munchkin Cat American Mix is considered a rare breed, being recognized by The Dwarf Cat Association and is the perfect pet for people whom they want their cats to look like kittens for all their life, a nickname associated with the Kinkalow is the teacup cat.

A Kinkalow is a miniature cat, with the weight between 3 and 7 pounds, resulted from the breeding of the Munchkin cat and the American Curl. The short legs and curled ears are the best features they have, being also the best features they could have gotten from their parents. Having short legs doesn’t stop the Kinkalow cat to jump to high places or playing around, one of their personality characteristics is the playfulness.

For a cat to be called a Kinkalow, it has to inherit the short legs from the Munchkin cat and the curled ears from the American Curl. That’s why it’s a rare breed, because these features don’t occur in each kitten born from these parents, and most of them inherit only one trait. Even though not all kittens are born with curled ears, they possess the gene, and they can pass it down to their offspring.

Some people might say that this breed is not healthy and the appearance is unnatural, but that is not true. The Kinkalow wasn’t artificially mutated, and the look is natural and their legs are not deformed, even it might give this impression at first sight. 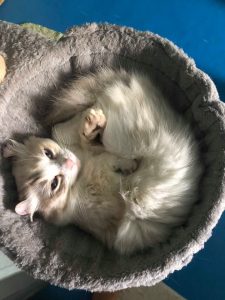 A Kinkalow Munchkin is easy to recognize if you know the features they should have to gain the title of a Kinkalow Cat. The curled ears inherited from the American Curl and the short legs inherited from the Munchkin Cat are the two things you should look for when trying to identify such a cat.

Another way to identify a Munchkin Cat is to look at their size, they are miniature cats, also called as teacup cats, and this represents another important feature and why they became so popular since the ‘90s. They are playful cats and affectionate towards their owners, and you can recognize a Kinkalow Cat if you look for these personality traits.

Owning a Kinkalow is like owning any other cat, but we can talk about the fact they require very little grooming, so this is an advantage over other breeds. Their personality traits consist of playfulness and, especially, the affection they direct to the people. Even though, at first sight, they don’t seem like great climbers because of their short legs, you would be impressed when you are going to see them jumping all over the house, high places being no exception.

The span life of a Kinkalow is yet to be determined, because of it still a new breed, so there is not enough information to give an accurate answer. Hopefully, they will gain even more popularity, and we can soon find out how long are they going to live on average. For now, the data suggests they live around 12-14 years, but this might change in the following years. They weigh somewhere between 3 and 7 pounds, so they are easy to carry wherever you want to. They haven’t got their nickname as teacup cats for nothing.

Sushi is amazing. She is really friendly and affectionate and really curious wandering about the house. Gets on well with other animals and strangers as well.

If you are the owner of such a cat, you should consider yourself lucky, as in the whole world there are only a few dozens, so it is pretty hard to come upon one, a rare breed indeed. Their exclusiveness is due to the fact, as mentioned previously, the chance of inheriting both features needed to be called a Kinkalow cat is quite low.

The International Cat Association or TICA for short registered the Kinkalow in 1997 as an experimental breed, so the history of this breed doesn’t go back centuries and is still considered a new kind of cat, but with a future that looks good for them. There was some controversy because for some breeders the legs of the Kinkalow cat looked deformed, but the breed is natural and it wasn’t artificially mutated, so that’s just an impression people have without any substantial grounds.

The work of Dr. Solveig Pflueger with Dr. David Biller proved from a scientific point of view that the trait inherited from the Munchkin cat is occurring naturally and it doesn’t cause any health problems and is a healthy breed of cat. This was the research which convinced TICA to register them as a breed.

Are There Kinkalow Health Problems?

This question about the Kinkalow heath arose because their look is not natural, and people tend to associate them with short legs dogs which are known to have spinal problems. For now, there is no reason to worry about the Kinkalow’s health as nothing seems out of the ordinary with them, except their exciting look.

Even though we don’t have enough data to be sure of the life span of a Kinkalow cat, for now, it seems that they live on average for 12 years. This is another hint that the breed doesn’t have any health problems as there are many other registered breeds of cats that perform worse on this aspect, but still, they are considered healthy.

American Curl’s are known to be very healthy cats. At the moment there is very to suggest American Curl’s are prone to specific diseases as a nature of the breed, so you could reasonably assume that the Kinkalow would not get any excessive health problems from this parentage.

If you still think that the Kinkalow cat is not a healthy cat, I should remind that the mutation that produced this cat was natural, not artificial and it wasn’t created on purpose, but a merely happy accident.

If you read this article because you are an owner of a Kinkalow cat, I must remind you that you are one of the only few dozens of people that can claim this title. If not, and you are thinking to buy a Kinkalow cat, the price for one kitten is around 2000 US dollars, this is dropping down, only if the kitten doesn’t have both features. Those being the curled earls and the short legs inherited from their parents.

American curls are low shedding cats and so far I’ve found Sushi to not shed a lot, so this could well be a trait for the breed.

A Kinkalow cat is affectionate, playful, small and if you don’t have so much time for grooming, you are lucky because this cat only needs grooming once a week. They don’t have any health problems, even though some people might contradict me, scientific research has proved them wrong already, so you shouldn’t worry about that.