The History and Origin of Munchkin Cats 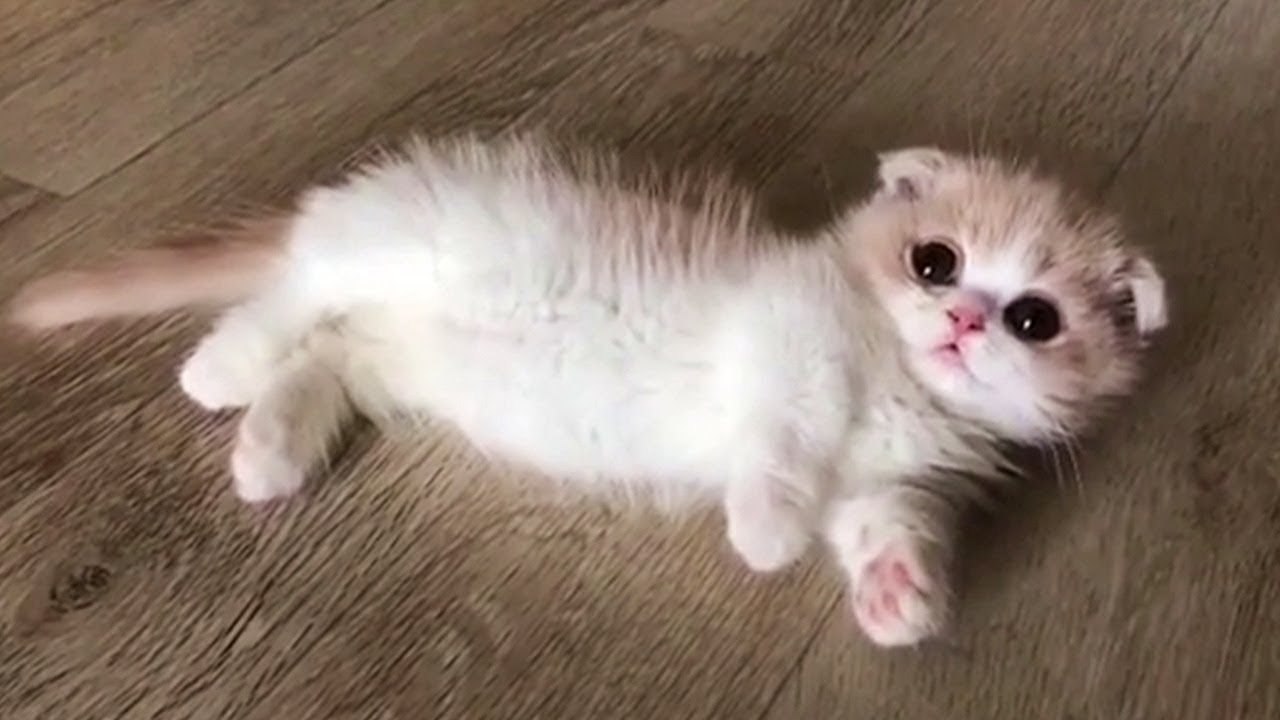 The History and Origin of Munchkin Cats

Compared to other breeds of cat with much more notable and authentic pedigree’s, the history of the Munchkin Cat is short and mired with some controversy.

The Munchkin Cat is best described as a cat of medium size with very short legs and a proportionally a long back. They are thick bodied with either short or long hair.

In short, they are a breed of cat specifically recognized by their short legs. They have been around since the beginning of the 20th Century as a breed and their physical condition is the result of a naturally occurring genome deficiency. Munchkin Cats were officially recognized as a breed starting in 1994 by The International Cat Association. There genetic traits are not the result of human breeding attempts and they were first introduced to the general public in 1991 at Madison Square Garden. The genetic trait means that a Munchkin Cat has to be bred with another cat breed for maximum health benefits. This causes some controversy in professional circles.

So What Makes A Munchkin Cat?

Perhaps somewhat oddly, when people see these cats there is a natural reaction to ask ‘if they are real?’

By that I mean, they have a look somewhat different from a ‘normal cat’ with their short legs.

So let me tell you now, of course they are real. I have had several and they are definitely real. The Munchkin Cat is a recognized breed of cat, although with some controversy.

What makes them a breed is this reconizabity. There is no requirement for anything other than the short legs. They come with different coats, coat lengths, body types, tail lengths and markings. 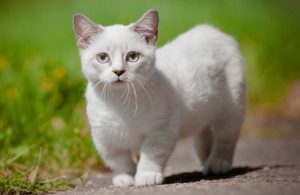 All sorts of accusations are leveled, quite unfairly at Munchkin Cats.

So, quite straightforwardly I will say, they are neither inbred, suffering from dwarfism, and they are not deformed.

They are not cats suffering a disability either.

The genetic condition is recognized and manageable. The misinformation online can be quite prolific and can leave many people wondering if a Munchkin Cat is in some kind of pain purgatory

Here’s a picture of Elsa, one of my Munchkin Cats on a day out to a tea plantation. She loved it. She is fine and quite healthy. 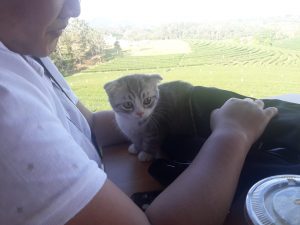 The breed is quite healthy and like any cat it can get a natural disease on an individual basis, but that is not indicative of the breed.

How The Munchkin Cat Got Its Name

Like James Bond or the Maine Coon, the story of how the Munchkin Cat got its name is open to interpretation. There are a few stories out there, and it’s up to you pick which sounds more plausible. Although any one of them could be true, maybe more than one.

If you remember L. Frank Baum’s book ‘The Wizard of Oz’ (published 1900), you then remember the 1939 film of the same name. In the book was Munchkin county, a native of which was referred to as a Munchkin.

The Munchkins were described as ‘…the same height as Dorothy’. Here’s the quote

“she noticed coming down toward her a group of the queerest people she had ever seen. They were not as big as the grown folk she had always been used to; but neither were they very small. In fact, they seemed about as tall as Dorothy, who was a well-grown child for her age, although they were, so far as looks go, many years older.”

Much like the Oompa Loompas in the 1964 book ‘Charlie and the Chocolate Factory’ by Roald Dahl.

Thus any short legged cat can often get the name Munchkin Cat.

Alternatively, Sandra Hochenedel, who in 1983 was a music teacher from Louisiana  found two that a bulldog had chased two pregnant cats under a truck. Being a cat lover, she kept one of the cats, which she named Blackberry.

Blackberry was female and half her kittens were born with short legs, the defining feature of a Munchkin Cat. A friend of Sandra’s, Kay LaFrance was given one of the short legged kittens which was named Toulouse (bit of a french connection there).

The Munchkin Cat breed is descended from Blackberry and Toulouse allegedly.

There are two different accounts here;

Kay LaFrance, the owner of Toulouse, gave the descendents to Dr Solveig Pflueger, a prominent founder and member of The International Cat Association (TICA). Although Pflueger would ascertain that Munchkin Cat has an autosomal dominant mode of inheritance, her daughter inherited one and named it ‘Mushroom the Munchkin’.

A breed was born……

The other theory is that because of her expertise in the field of cat genetics she was asked to appear on Good morning America. When the show called and asked for the name of the breed, she replied ‘Munchkin’.

I like to think both of those could be true. 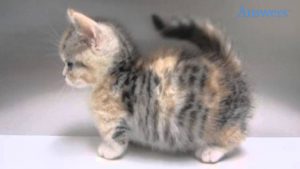 The work done by Dr Solveig Pflueger and David Biller, the head of radiology for the college of Veterinary Medicine at Kansas State University was instrumental in acceptance of the breed.

With an autosomal mode of inheritance they also concluded the breed did not have any spine problems or health issues that were advisable to be ‘bred out’.

Despite Dr Solveig Pflueger and David Biller being recognised authorities within their field not everyone was keen to follow.

The Munchkin breed development program, having started in 1994 determined that Munchkin Cats have a dominant inheritance pattern that is passed on genetically. This is similar to both Corgis and Dachshunds.

The internationally recognized Cat Fanciers Association (CFA) however, does not recognize the breed.

And they are not alone.

The Federation Internationale Feline, The Governing Council of the Cat Fancy and a territory in Australia (Australian Capital Territory) all consider the breed unacceptable. The issues are mainly surrounding the health of the breed.

I fully realize this is not the most interesting question and information about the Munchkin, however, it is probably the most critical.

The reason will become obvious, and if you are interested in Munchkin Cats then it is necessary to understand.

Your genes are a segment of your DNA that have been passed down to you. They will confer a trait in you. Genes are packed and organised into chromosomes.

A set of chromosomes for each pair will from your mother, and one from your father. This is true in animals as well.

The Munchkin Cat is no different.

To make a cat of ordinary leg length both the mother and father need the respective genes for that particular leg length. When you breed two Maine Coons together, you will get a Maine Coon kitten that will be regularly shaped. To produce anything different would be a mutated gene.

The gene that produces short legs in Munchkin Cats is called autosomal dominant. This in simple language means it is not gender specific and is expressed whether it is inherited from the mother or father.

This is the important point though. Please pay attention here.

When the gene is inherited from the mother and father it is considered LETHAL. Munchkin Cats as a result MUST be bred with other cats and not another Munchkin Cat.

The offspring of a Munchkin / Domestic Cat pairing have a 50/50 chance of being Munchkin Cats themselves. If they offspring are short legged, then they have inherited the Munchkin gene.

You can see why the breed is causing some controversy.

It has been said that the Munchkin Cat breed came from a natural genetic mutation that happen in all species.

History of the Munchkin Cat

Much has already been discussed so far about the history.

It’s fairly certain that the Munchkin breed came into existence from a natural genetic mutation. No known interference from scientists or natural cross breeding is entertained as being realistic.

As previously discussed, Blackberry and Toulouse are still considered the ‘Adam and Eve’ of the Munchkin Cat world if you will.

Although not being officially recognized by The International Cat association until 1994, the Munchkin Cat is considered to have a longer history, with reports dating back to the early 20th century.

The advent of DNA testing techniques is what brought the Munchkin Cat to official recognition.

Compared to more famous breeds the Munchkin history is considered a short one. They have been around for years but were never bred intentionally. Indeed, some may have been terminated prior to be being recognized as a breed, due to an ill informed decision about health and deformity, which we can now prove genetically to be false. 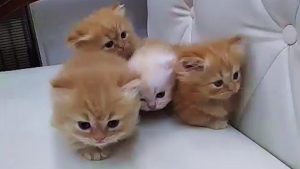 This is difficult to answer with a definitive statement.

As they have been seen to be around for many decades, although not with any recognition, it is difficult to pinpoint the EXACT cat which the naturally mutated gene happened.

The first to be named and recognized were the aforementioned Blackberry and Toulouse.

Kay LaFrance was said to have many cats and therefore, many Munchkin Cats were said to be local to the area following her decision to try any recognise the breed through TICA.

Although TICA initially denied the Munchkin official breed status due to insufficient information, since 1994 it has had growing publicity and now is quite a popular cat, sparking much interest.

There have been quite a few incidents along the Munchkin Cats journey that qualify as important.

The Munchkin Cat has come a long way in its short (pun intended) years and will no doubt continue to confound its critics. Despite the many detractors, the many breeders and insurers that recognise the breed will hopefully see it progress well in the future.

The Munchkin Cat Holds A Record

A mere 10 years after gaining acceptance as a breed by TICA, in 2013 a Munchkin Cat called Lilieput (I get what they were doing there) from Napa, California was given the honor of the world’s ‘Shortest Living Cat’ by Guinness World Records.

She is owned by Christel Young

A diminutive status is what characterizes a Munchkin Cat. This is caused by a naturally occurring mutated gene that is passed on when breeding.

With it’s short and controversial history, the debates the Munchkin Cat stokes with the cat fraternity will no doubt continue.

More and more people are finding out about them every day and everyone has an opinion.

It’s a very active breed and apart from its short legs behaves like any other cat. They come in both longhair, and shorthair varieties and don’t seem to possess any significant health issues.

It’s my fondest wish that the current situation improves and the Munchkins future is a bright and shiny as its past.

Tags :
The History and Origin of Munchkin Cats